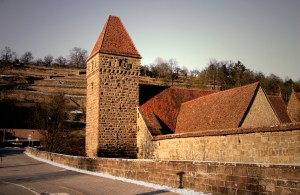 Recently a friend invited me to check out together a treasure of human culture and history: the old medieval Maulbronn Monastery. Originally we had planned to take a guided tour in candle-light atmosphere in the evening but quickly learn that the candle-lit experience is booked out already weeks before. So we decide to visit the buildings earlier in the day and on our own so that eventually we later come to enjoy an awesome meal and excellent wine at the monastery’s historical tavern…

Maulbronn Monastery (German: Kloster Maulbronn) is the best-preserved medieval Cistercian monastery complex in Europe. It is situated on the outskirts of Maulbronn, Baden-Württemberg, Germany and is separated from the town by fortifications. Since 1993 the monastery is part of the Unesco World Heritage. – [Wikipedia]

Following now is a photo series with some info about the different buildings and interior of the monastery complex. I split this blog into three entries, starting here with what could be termed the ‘outer complex’. We are at the entrance gate in the South-West and walk by the Western fortification wall and then turn right behind the so-called Hexenturm (witch tower) in the North-Western corner. 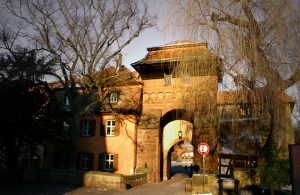 Klostertor (South-Western Gate): monastics were allowed to pass freely and instantly, sick and poor men were to be welcomed as if Jesus himself was asking entry, women in turn were not allowed to enter the monastery complex. If females wanted to attend mass they were however allowed to do so at the small chapel nearby the entrance. 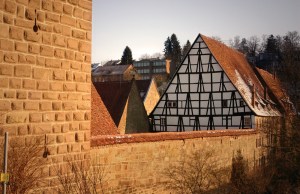 The winter sun sheds a warm golden light on the monastery walls and red roof tiles… We walk behind the monastery complex along the Northern fortification wall and trench. Above is situated the wine yard and below are the former milk stables and mill. We cross the bridge at the back entrance at the round path, from which wooden stairs are leading into the administrative complex with the old mill, bakery, food office, servant’s quarters and former fiscal office building. 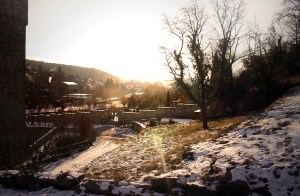 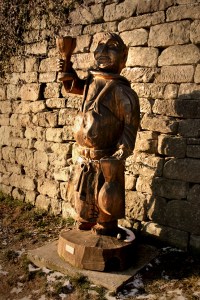 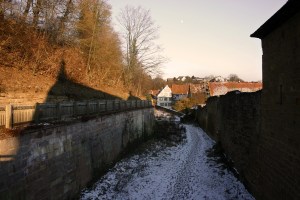 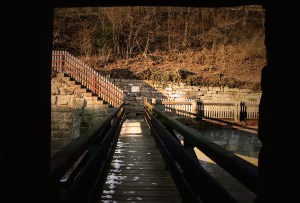 Back Entrance, Bridge – view from the Round Path, Northern Wall

Stairs, Back Entrance with Old Mill Building to the Right 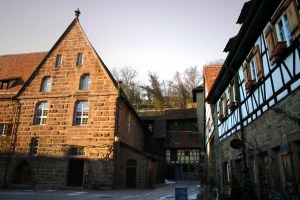 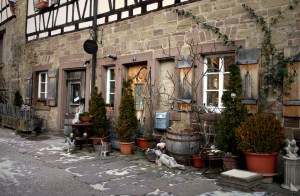 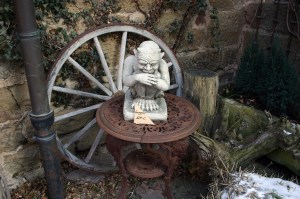 Fancy little gargoyle figurine in front of the cloister store 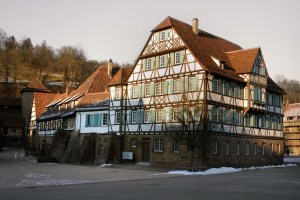 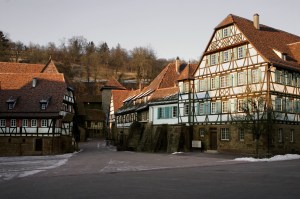 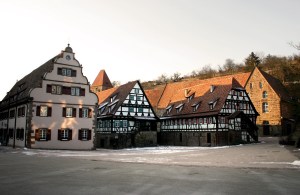 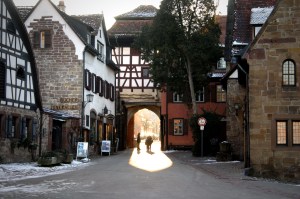 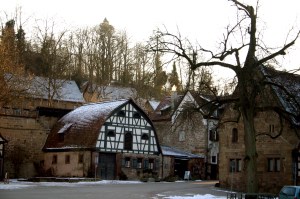 So ends a quick look round the buildings situated in the West of the monastery complex. This part occurs actually like a small town of its own. Everything that was needed to organize life was right there within the protecting walls of the monastery. Left to add is the former Wine Press House next to the cooperage, now housing the reception. Here we get our tickets for the actual Cistercian abbey, located in the East, with its partly Romanic and partly Gothic architecture, which I will delve into next.